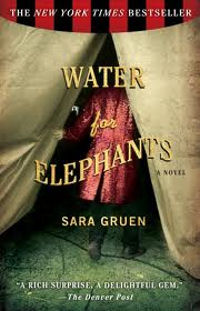 This story begins in the mind of ninety (or ninety-three, he can’t remember which) year-old Jacob Jankowski. Not-quite-forgotten in a nursing home, he contents himself with harassing his nurses and complaining about the food. That is, until the circus comes to town and another elderly resident claims to have carried “water for the elephants.” Jacob begins to recall his life as a veterinarian for the circus, and the wild ride that is life on a circus train.

As a young man, Jacob had been preparing to take his final examinations for veterinary school when he gets bad news – both of his parents have been killed in an accident. He learns shortly afterward that his parents were deeply in debt because of his Ivy League education and that his dreams of joining his father’s veterinary practice will never come to fruition. Lost and devastated, he skips his final exams and runs away. He finds himself on a circus train, looking for work because he knows that no respectable practice will hire him without his having finished school.

When Uncle Al, the owner of the circus, learns of Jacob’s veterinary training, he hires him to look after the animals. This is complicated by the fact that August, the head animal trainer, is a cruel man who is often abusive towards the animals in his care. August’s wife, Marlena, is an attraction in the show. Jacob falls in love with Marlena and August becomes furious and beats them both. Marlena tentatively leaves August and begins staying in hotels when she is not performing. Uncle Al, not wanting any drama, explains how dangerous August is and threatens Jacob – unless he leaves Marlena alone and reunites she and August as a happy couple, his friends (one of whom is a cripple who he has been hiding in his room) will be red-lighted (fired by way of being thrown off the moving train.)

Marlena proves herself unwilling to reconcile with August because she is in love with Jacob; which infuriates Uncle Al. Shortly after Marlena tells Jacob that she is pregnant with his child, Jacob sneaks out of his train car in the night in order to break into August’s room and kill him, but he can’t find him. He returns to his room to find that his friends have been red-lighted, and that he was supposed to have been as well. Before he and Marlena can decide what to do, several of the red-lighted workers return and cause big trouble at the show (I won’t give away more and spoil the end, here.)

Even if you have little interest in the seedy history of the great American circus tradition, this book will suck you right in! Peppered with fact and history, love, cruelty, murder, and of course the bearded lady, the show must go on! I liked it very much. The ending had me cheering on the inside, and I may have even teared up a little.

Fun Fact: The book was turned into a movie released this month (April 2011) starring Reese Witherspoon as Marlena, Robert Pattinson as young Jacob, and Hal Holbrook as elderly Jacob.

Bother if: I thought this was a very creative approach to what amounts to a romance. I really liked the backdrop of the circus and animals and performers, and I thought that the characters were well fleshed-out. Jacob is a particularly endearing character. Indeed, all of the characters are written in such a way that they force you to have an opinion of them, whether it was good or bad. This was a quick read, and very entertaining. It was one of the more vividly written books I have read in a long time with regard to the mental picture it gives you – you feel like you’re right there, at the circus.

Don’t Bother if: The animal cruelty depicted in the story bothered me quite a bit. It isn’t that it was terribly graphic in the telling, but that sort of thing really upsets me on a personal level. If it upsets you to a great degree, you might skip this one. Also, I thought that Marlena was a bit of a milquetoast, and I found myself rolling my eyes at her quite a bit.

Spread This to the Internets:

I'm a musician, writer, web developer and avid reader who maintains two blogs. For Bucket List Book Reviews (formerly Bucket List Media), my goal is to read and review each book on the popular list "1,001 Books to Read Before You Die." This blog is intended to chronicle my experiences and thoughts on each, and share opinions with other bibliophiles. Bucket List Media is a semi-serious blog which is appropriate for all ages. For Live At E's (see the menu), I rant in general about pop culture, life, celebrities, and current events. Live At E's contains foul language and is deliberately offensive. Turn on your sarcasm detector.
View all posts by Miz Parker →
This entry was posted in Fiction, Historical Fiction, NYT Bestsellers, Romance, unBucket Books and tagged Book Reviews, Books, Fiction, Historical Fiction, NYT Bestsellers, Sara Gruen, Water for Elephants. Bookmark the permalink.