I Know Why the Caged Bird Sings 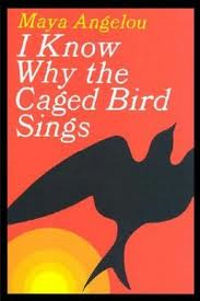 As part one of six of a series of autobiographical novels written by Maya Angelou, I Know Why the Caged Bird Sings moves swiftly through the author’s life from age three through age seventeen, from Arkansas to St. Louis to California to Mexico. Marguerite “Maya” and her brother are sent as children to live with their grandmother, “Momma” in Arkansas. Haunted by their parents’ abandonment, the two struggle with racism in the south – they are relentlessly tormented by their white neighbors, even though Momma is relatively wealthy as the owner of the local general store. For example, the white dentist refuses to treat Maya’s rotting tooth, even though Momma reminds him that it was she who loaned him money during the depression and enabled him to save his business. This becomes a commentary on the nature of racism, and how Momma’s money was good enough for the dentist when he was in need, but he felt no responsibility to help Momma when she was in need, because she was black.

In a disturbing interlude which becomes the center around which Maya’s young life revolves, the childrens’ father comes to pick them up from Momma to live with him, but ends up leaving them with their mother in St. Louis. Eight-year-old Maya is sexually abused and raped by her mother’s boyfriend, who is found guilty but escapes jail time and is subsequently murdered, probably by Maya’s uncles. Maya shuts down emotionally (except to her brother) and rarely speaks to anyone for nearly a year. She remains mute until she meets a kindly neighbor of Momma’s; Mrs. Bertha Flowers. Bertha supplies Maya with books and literature and encourages her love of reading, and eventually manages to coax Maya out of her shell.

Eventually deciding that the children need to be sheltered from the racism in the south, Momma sends them to live in San Francisco with their mother. Maya attends high school and takes up dancing, and becomes the first black female streetcar operator in San Francisco. Worried that she may be a lesbian, she seduces a boy her age and becomes pregnant. The novel ends with Maya accepting her new role as a mother at age seventeen.

Fun Fact: When selecting a title – which is a reference, of course, to chained slaves – Angelou turned to Paul Laurence Dunbar, an African-American poet whose works she had admired for years. With Shakespeare, Angelou has credited Dunbar with forming her “writing ambition”. The title of the book comes from the third stanza of his poem “Sympathy”:

Bother if: This is not only a tremendously entertaining story, but Angelou’s writing lends a poetry to her life that makes the terrible things somehow okay, and the good things even better. Caged Bird is stunning portrait of a young black girl’s place in not only the south, but the greater world beyond it, and is a VERY worthwhile read.

Don’t Bother if: The novel necessarily focuses on themes of racism, violence, child rape, discrimination, teen pregnancy, and other upsetting subjects. I thought it was a wonderful testament to strength in the face of adversity and how one can overcome hardship with effort. Certain parts, however, were pretty gut-wrenching.

Spread This to the Internets:

I'm a musician, writer, web developer and avid reader who maintains two blogs. For Bucket List Book Reviews (formerly Bucket List Media), my goal is to read and review each book on the popular list "1,001 Books to Read Before You Die." This blog is intended to chronicle my experiences and thoughts on each, and share opinions with other bibliophiles. Bucket List Media is a semi-serious blog which is appropriate for all ages. For Live At E's (see the menu), I rant in general about pop culture, life, celebrities, and current events. Live At E's contains foul language and is deliberately offensive. Turn on your sarcasm detector.
View all posts by Miz Parker →
This entry was posted in 1,001 Books to Read Before You Die, Biography, Memoir, Nonfiction, NYT Bestsellers and tagged Autobiography, Biography, Book Reviews, Books, I Know Why the Caged Bird Sings, Maya Angelou, Memoir, Nonfiction, NYT Bestsellers. Bookmark the permalink.

2 Responses to I Know Why the Caged Bird Sings